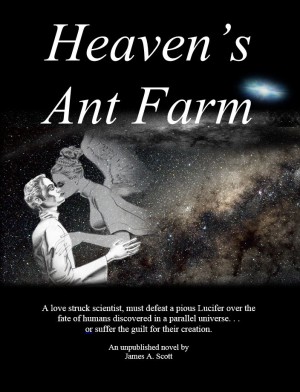 In HEAVEN’S ANT FARM, Heaven has all but sworn off religion—science and Loving Free Will reign supreme. However, trouble brews as a new religious movement threatens Heaven’s peace. Disorder sets in after a meek, muddled and love struck Prof. Yahweh Tabbris creates a parallel universe and decides to show how humans discovered on a planet in the new cosmos, named Earth, can benefit from the same Loving Free Will that has made Heaven a tech-utopia.

But a pious Lucifer Deville—driven by his belief that only Korbibtor his god, lord and savior, is responsible for Heaven’s good fortune—decides to vilify Loving Free Will and gets to Earth first. There, he introduces the villagers he finds to the temptations, challenges and consequences of free will. And the place goes to heck in a hand basket.

After Yahweh’s wife, Gwendolyn, was killed in a gun battle that enabled Lucifer to make his escape to Earth, a distraught Yahweh, haunted by repressed anger and sadness, decides to hunt down Lucifer. It’s now a rumble in the Garden of Eden jungle where Yahweh must defeat Lucifer and save Earth’s humankind or suffer guilt for their creation. And along the way, Yahweh will navigate the conundrums behind the meaning of Loving Free Will and relive the very reasons why Heaven renounced religion in the first place.

Inspired by works such as Dr. Strangelove, the Star Wars trilogy and Wicked: The Life and Times of the Wicked Witch of the West, HEAVEN’S ANT FARM is a sci-fi novel that incorporates the Big Bang, time travel, quantum mechanics, contemporary social parodies and an occasional poke at organized religion to turn Genesis, upside down. The first in a series of novels, HEAVEN’S ANT FARM is complete at about 92,000 words.

Click here to see what people are saying about HEAVENS’S ANT FARM!