Korbibtor was the god of Heaven and its main religion before the Holy Nuclear War nearly destroyed that world.

In ancient Heaven, getting food and shelter was erratic and unpredictably subject to the whims of nature. Religion was born as a way to explain the unexplainable, understand the purpose of humankind and pay homage to the gods. Its success produced a common understanding and thinking among the people who practiced rituals to please their gods. But woe be it to those who did not followed the sacred rules. 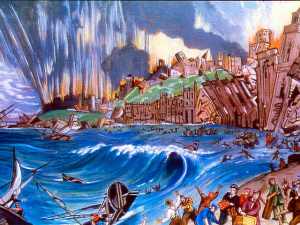