I’m not religious. But there is something big and wonderful going on out there…and no one can figure it out. Sure, there are the mystics and priests and prophets who claim they know. They speak with complex and convoluted ideas that some turn to their own advantage.   Then there are the hard facts of evidence—theorems and experimental proof all written in complex equations of high order math and multi-dimensional string theory that few of us understand. Yet still many try to control this science to empower themselves over others. Now a great war envelops us. A centuries long conflict that has taken many casualties. It showed itself during the Roman Catholic Inquisition that condemned Galileo Galilei in 1616. It lives today in the Middle East as members of the original family make war. It even frolics in the great halls of the US Congress as the left and right maneuver to impose their God given mandate and will over the other.

I’m not religious. But during this Christmas season, I know something big and wonderful is going on out there.   And since no one can figure it out completely, we fill in the missing gaps. It’s OK to guess—but not to the point of making everyone live and believe in accordance to your faith.   Hence, the book Heaven’s Ant Farm with its sixth rule of life—thou shall not interfere in other peoples’ lives (aka mind your own damn business).

I’m not religious. But I do believe. I also believe that the religious orders, faith and routines of today is no better than a scientific wild ass guess at what really happened and continues to happen today.   And since we don’t understand what we see, we call it magic or mystery or the blessings (or condemnations) from the Holy Ghost. So I happily breathe in the holy smoke of my ancestral Episcopal Church (or Catholic light as some call it). It’s a good place but it, like any religious order, has 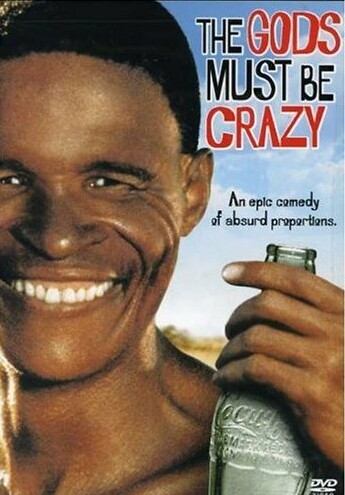 challenges. Do you remember the movie “The Gods Must Be Crazy?” The pilot of a small airplane tosses out an empty Coke bottle high over the African savanna.  Bushmen find this smooth and clear rock and thinking it is a gift from their gods promptly commence to fight over it. They cook up a crazy religion that turns their otherwise peaceful world upside down.

I’m not religious but I do believe the same thing is happening here.  From the Holographic Principle comes a black hole theory that basically says everything around us is just a shadow, a three dimensional shell of a much greater four dimensional universe.   That fourth dimension is hidden from us and like in Plato’s Allegory of the Cave, we live imprisoned in the remaining three. Well, someone in the fourth dimension threw a Coke bottle and we see its shadow here in our three dimensional world. It’s a magical thing and we are fighting over who controls it, over who has the right to dictate the meaning of this mysterious shiny object. And in doing so, we are missing out on the wonders and meaning of this life.

I’m not religious but I wrote a science fiction novel based on the bible and things like the big bang and time travel…and I think about it every day!