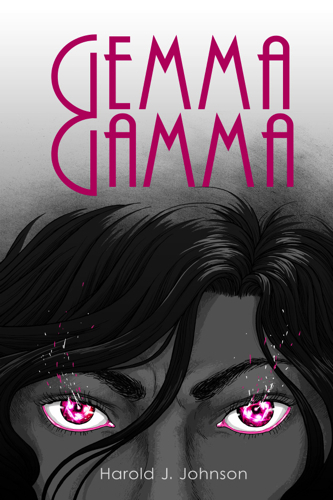 This week, I decided to do a quick book of Harold Johnson’s new novel GEMMA GAMMA. In short, this is a great young adult science fiction story about a teenage girl who must quickly discover who she is and prevent her mother and new friend from becoming collateral damage as the world also tries to figure out who she has become.

There are least three characters who grabbed my attention. But this story is all about Gemma who goes through more than just the usual changes young people endure on the road to adulthood. Not only must Gemma deal with adolescent mood swings in a somewhat dysfunctional and broken family but she must also navigate the change from human to some other form of life with super human powers the, nature of which she has yet to discover. Then there’s Phil, the geeky kid who’s in love with Gemma and who wants “to be more like Clint Eastwood.” In the story he gets his latter wish though not the girl. Then there’s Victor the Astro-Physicist (aka Astro-Head) whose main function in the book is to explain the science behind the story.

GEMMA GAMMA also sports the usual hard headed (and somewhat narrow minded) military general bent on taking over the town of Stanely-Dixmoor to apprehend Gemma, the apparent source of extraterrestrial happenings on Earth and the mad scientist, Doctor Akuje (aka ‘Doctor A.’) who is obsessed with sequestering Gemma so as to milk out the cosmic secrets of “Fat Boy” that she doesn’t really know.

Character arcs and growth is clearly evident throughout the story and makes for an entertaining read and view of adolescent conflict and growth. One example is when Gemma snaps at Phil after she loses in a fight at school and Phil tells her “Don’t get pissed at me. Your attitude is irrelevant to your loss.” This latter day Spockonian response is one that I would expect from a geeky but now hard-nosed kid. Another good passage that is an excellent literary example of showing not telling happens between Gemma and Phil as Gemma’s mom admonishes her over Phil’s speaker phone. After Gemma tells her mom, “Come on Mom, it isn’t that bad,” her mom gives only a silent response. So Gemma turns to Phil expecting him to take her side. But Phil only gives Gemma a silent look that acknowledges her mom’s speechless statement in a preachy sort of way by just “tilting his head and raising his brow…” This is a nice description of a person’s response without words and one that I hope to emulate in my own science fiction novels. And of course for this reviewer who is also a pilot, my favorite line in the book comes from a passage that describes Phil’s bi-plane named Cyclone, that “sleeps peacefully in the middle of the barn-turned-workshop”. . . sigh.

GEMMA GAMMA is a story is filled with the pain of adolescent growth in a world that has just discovered it is not really alone and now feels like a lowly mouse that can, at any moment, be crushed by a nearby elephant. There are smacks of religious notes in this novel as civilization once again realizes that not only is it not the center of the solar system or the universe but, now it is also not the center of intelligence in this cosmos as the very laws of physics known to it are snapped clean by a phenomenon it can only describe as “Big Boy.”

Overall, this is an excellent summer time read novel and I highly recommend it to those who like to have more than the usual dash of real science in their scifi story reads.