Here’s a DRAFT of the Prologue for MILK RUN.  It’s a quick chapter designed to show us what’s in store for the rest of the story.  Comments welcomed. 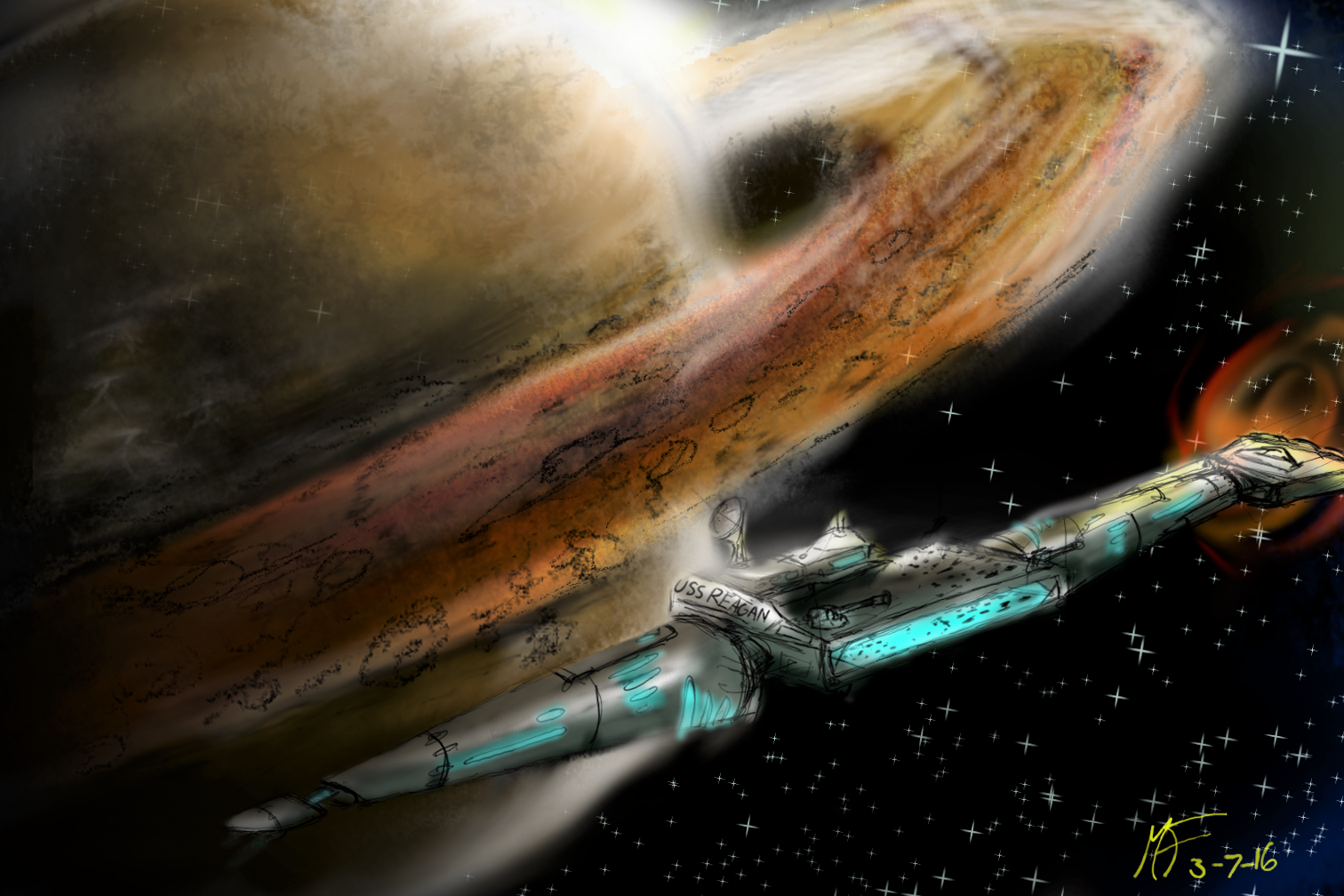 Lt. John Torlini squints at Saturn that hangs heavy right smack in front of him—a big bright yellow brown ball of gas. His space fighter’s approach vector points his ship towards a spider web of brilliant white flashes below. John ignores the atmospheric storm and trusts the autopilot to deal with the orbital insertion calculations. He looks queasily towards the faraway but still brilliant yellow speck of a sun that rises overhead. Even at this distance, the sun is bright enough to light up Saturn’s rings of ice and stone that casts a long shadow down the 1,500-foot flight deck of the USS Reagan that John is escorting into orbit.

John glances at his fellow ‘escort’ space fighters below. Some escort! Compared to the dreadnaught, they look more like immature gnats fluttering around some overgrown elephant.

Awe tingles down John’s back as the Reagan noses up slightly to assume its orbit. This is Space Command’s newest multifunction battle cruiser—4,500 feet long, sleek, shiny black and sectioned into three main parts of equal size. The front and rear counter rotating conical sections bristle with long nosed mass drive rail cannons while the middle flight deck section remains stationary. There’s a beehive of activity around the USS Reagan as space fighters and bombers of all sizes and shapes crowd the flight deck while others fly into and out of the hanger deck below.

Most impressive is the black behemoth’s quad-pod engine section. It takes about ten minutes to charge up the quad-pod’s plasma drive, but once that happens, watch out as it accelerates the Reagan up to 1/3 C. After that, the ship’s Grav-mags kick-in to shrink down the fabric of space in front making it appear that the ship is traveling up to ten times the speed of light. But for now, the quad-pod is dormant . . . except for what looks like an orange red halo that has appeared right behind it.

John toggles his squadron leader, “Pacer One this is Five. What is that behind Reagan’s engine pod?”

After an uncomfortable silence, the squad leader responds “Don’t know.”

“Whatever that is, it’s moving closer.”

John looks over to his wingman, Pacer Six, who’s black helmet looks back and gives a quick nod. No need to say more. John pushes the throttle forward to military thrust and snap rolls his fighter up then back around towards what now looks like an orange yellow smoke ring that someone has puffed at the Reagan’s hind end.

D-Jump portal and right here in Earth’s solar system. Other than in training sims, John has never seen one before. But as his ship accelerates in he knows only one thing comes out of them.

A chorus of voices scream out over his communication channel, “battle stations, all Pacers form up on that smoke ring, blast whatever comes out of it!”

Still 30 seconds from his target, John’s fingers fumble to find and flip the correct series of safety switches to magnetize his fighter’s mini rail gun. He shakes himself. This is what he trained for and now is not the time to flub this up.

The target computers come online and the holographic ‘kill pickle’ settles in on the smoky haze in front of him. But he looks just ahead the ‘pickle’ and on to the object that has just popped out from the smoke ring—a familiar but unmarked spacecraft with battle scars and burn marks.

As he and his wingman close in, the craft grows in size and assumes the shape he anticipated. A gunship, about 300 feet in length and similar to SpaceComm’s Warthog class gunships, complete with thick armor and an oversized rail gun that’s two thirds its length. The unwelcomed marauder accelerates towards the Reagan’s achilles’ heel, a spot so close behind it’s dormant quad-pod that the flag ship’s rail cannons can’t shoot at it. The sneaky bastard lets loose a red hot stream of particles that slice up the hind end of the mighty flagship then continue forward into the main sections of the ship.

A quiet tone sounds in John’s helmet. Finally, in range he grumbles to himself as he lets loose his own blue fire of magnetic projectiles. But the munitions just bounce off the gunship’s side like glass marbles off concrete. “That thing has magnetized armor,” he yells for all to hear.

More screams from the command channel shriek inside his helmet as the Reagan’s maneuvering thrusters swing its tail right, then up then down. But the gunship easily matches the flagship’s turns. “They can’t out maneuver it!”

So, John forms up with his wingman directly behind the gunship. His heart pounds away as the ‘kill pickle’ lights up. Time to blow the ass off that thing!

Then a flurry of angry red particles fly at him. He jerks his craft around and avoids the onslaught. But his wingman is not as lucky.

With a loud crash, shrapnel from the exploding wingman slams into John’s ship. Then a high pitched grinding sound from the back of the fighter curdles his stomach while the scenery outside his cracked windshield shows Saturn and the stars beyond doing summersaults. A heavy weight now pins his body hard against his ejection seat.

This is what an errant champaign cork must feel like, he wonders as he pushes against the erratic centrifugal forces to shut down his dying engine before it explodes.

Then a silent bright white explosion erupts right in front of his ship. More shrapnel crashes against the plexisteel canopy. The cracked space shield holds, but the explosion blinds John. He grumbles just like his old flight instructor does every time he screws something up, “that’s what you get for not dropping your helmet flash shield.”

Now engine fire alarms ring his ears. Still blinded, John’s fingers instinctively find and flip the engine fire extinguisher switches. The alarm goes silent. Maybe the engines will restart, he hopes as his fingers flip the right restart switches in their proper sequence. But he gets what he expected. Nothing!

So John’s tired fingers find the switches to fire off a sequence of stabilizer thrusters to steady his tumbling ship.

After a dizzy eternity of listening to the cries and orders careening across his ears, John’s sight partially returns and a more stable view of the universe greets him. But the scene is not encouraging.

It’s maneuvering thrusters blasted away, the Reagan can no longer wiggle its way out of this mess. And the projectiles from the swarm of space fighters that launched off its flight deck can’t penetrate the gunship’s armor.

Now the communications channel takes on a somber tone as voices scream out “abandon ship, abandon ship!” The battle cruiser has begun to disintegrate; parts fly off like embers from a burning log.

“Pacer leader, this is Five, you there?” John calls out.

No response. So John calls out to others in his escort squad.

“Pacer Seven and Eight you there?”

“This is Pacer Five, any escorts left?”

“Pacer Five, this is Tiger Twelve, I think you’re the only one left from your squad. It’s just Tiger, Lion and Leopard squadrons out here. Where are you?”

John checks his navigation computer and realizes it is shot to shit. “Don’t know,” he responds as he eyes the now much, much closer electrical storm that he saw on Saturn earlier. “Engine is dead and I’m adrift in a decaying orbit. Nav is down. Going to need a tow and quick.”

Not good, thinks John as he activates the emergency beacon and snarls at the gunship as it finally veers away from the USS Reagan that has just taken a nose dive towards the planet.

Tiger Twelve was right. Things are getting busy over there as tiny escapes pods fly away from the cruiser. But they are easy pickings for the gunship that seems intent on leaving no survivors.

Suddenly the USS Reagan undulates from within. John can’t believe what is happening before his eyes as the flagship’s belly detonates, breaking the massive battleship into two ragged pieces that plunge into the Saturnian atmosphere. The falling wreckage of the USS Reagan flares brighter than either the sun above or the lightning storm below.

With his fighter’s orbital decay alarm beeping loudly, John watches as the gunship picks off the last of the escape pods and space fighters. He expected the gunship to make a bee line to his position and finish the job. But instead a red orange halo forms around the gunship, which quickly dissolves . . . taking the gunship with it.