OK everyone! As we all know, almost every good movie, book or play has a love scene. So, here it is for GOD GAMES. But this one is different. It’s based on science and a saying that goes like this, behind every man stands a woman!

Now, before I get nasty tweets from 50% of the global population, I’ll add that was never really the case. Rather, she stands beside him. And many times, as I have personally discovered, she truly stands in front of him. And wisely, I have no comment about that reality other than to say that GOD GAMES is full of strong women, notably Eve and Gabriel.

And then, there’s Gwendolyn, Yahweh’s wife. At first glance, Gwendolyn appears to be secondary to Yahweh, an in the background supporting wife and mother of two kids. But, there’s more.

Looking deeper into the story, we discover that Gwendolyn actually stands in front of Yahweh. By that, I mean that through her love she leads Yahweh to make the right decisions.  She’s like a guiding beacon of light that stretches out across a turbulent sea to him. He depends on her to calm his troubled mind, cluttered by shame due to poor math and science skills and that made him different from the others when he was young.

For you see, such deficiencies are seen as a shameful disadvantage in Heaven’s tech-utopian STEM (science, technology, engineering & math) society.  And he suffered for that, being constantly beat up by teasing kids and looked down upon by his teachers.  Yep, Yahweh was the dumbest kid on the block and he hated that fact.

Eventually, Yahweh overcame his learning difficulties, and advanced in class.  He even won the highly coveted Professor Plenteous Award from the Great Scientific University of Heaven.  He is now a highly recognized Professor of Astro-Physics and High Energy Quantum Mechanics.  But, that built up rage from his youth and desire for revenge was never really quenched. Without Gwendolyn, Yahweh knows he would become an angry old man filled with fear.

But Gwendolyn is somehow able to reach into Yahweh and set his mind to rest.  She pats down those fires that burn deep within. And she does it without saying a single word.  It’s a love that asks nothing in return because they are each other.

OK, what do I mean by that?

Gwendolyn and Yahweh are actually a pair that follows the Law of Quantum Entanglement where two separate particles know what the other knows and you can not described one without considering the other.  Some folks describe this as being soul mates.

Gwendolyn knows what’s in Yahweh’s head before he realizes it. And the reverse is true as Yahweh absorbs Gwendolyn’s response before she even speaks. Test one, and you know about the other no matter how far apart they are from each other. As Yahweh muses in the book, “how else can she know my thoughts then sends me soft whispered responses from thousands of miles away? It’s an entanglement that goes beyond matrimony. It’s spooky!”

As a side note, Albert Einstein referred to entanglement as “spooky action at a distance.”

So needless to say, GOD GAMES examines Yahweh’s reaction when Gwendolyn is taken away from him. She dies during a gunfight that erupts as Yahweh is giving her and his son, Alexander, a tour of his lab at the Great Scientific University of Heaven. Now, there is nothing to douse the anger that burns inside.

You see, Lucifer was the cause of the lab gun battle as part of a plan to lead an insurrection to force Heaven to abandon science and technology and worship Korbibtor, his lord, master and savior.  Worst still, Lucifer threatens to corrupt humankind on Earth, a planet discovered in a universe Yahweh created, to shame Heaven back to its religious roots. As a result, Yahweh is enraged, he’ll have to set things straight!

So, now you know the SciFi reason why God is so angry.  Not even Spielberg or Lucas could paint a better scene than what’s described in the Old Testament of the Bible (Isaiah 5:25) where “[t]he Lord’s anger burns against his people; his hand is raised and he strikes them down. The mountains shake, and the dead bodies are like refuse in the streets.”

And there is nothing (not even Gwendolyn) to hold Yahweh back.

So, this is where the science in SciFi comes into play.  The first law of thermodynamics, Law of Conservation of Energy, reminds us that energy can neither be created nor destroyed, only changed from one form to another. True to this law of physics and chemistry, we discover that Gwendolyn really has not been destroyed and her entangled connection to Yahweh remains.

So, Gwendolyn returns to Yahweh, albeit in a different form, an angel in this case as we see in this scene from GOD GAMES.  Here in a plexiglass covered trench where Yahweh studies his ant farms, Gwendolyn reminds Yahweh that all is not lost.  Her appearance raises Yahweh’s confidence and diminish the angry fire within as shown below.

The crumbly earthen walls are dark but bathed in sunlight that shines through the plastic glass overhead. The warm light encourages an exploration of the dirt floor passageways. And along the way, a sweet earthy aroma greets your nose.

Then a familiar voice sounds in his ears, or is it in his mind? “There’s hope on Earth.”

Now a soft whiff of her perfume pushes away the tunnel’s earthy fragrance like a soft breath.

“Gwendolyn?” Yahweh strains to see into the dark corners of the underpass. But the harder he searches, the murkier his vision becomes.

“Make me proud of you,” comes a reminder to him, but from where? 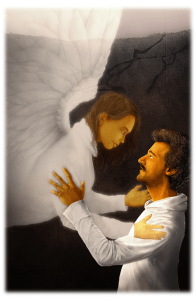 And with that reminder comes a warm breeze, a touch really, followed by a hazy sight cloaked in a foggy mist that presses a gentle kiss to his lips and then levels her chestnut eyes at his.

Wearing a white robe wrapped loosely around her body, she floats almost horizontally to him. She pulls him close. Her embrace feels so warm, so tight, so good. But how can this be? Is this what it’s like to finally go insane?

Their eyes lock together for a short moment that ignites long memories of her in the garden talking about the soul —Kinspri, she calls it—and back home when she applied ointment to soothe Alexander’s wounded arm after his schoolyard fight.

Then she begins to fade.

As she disappears, she whispers, “I know you can help them. Make me proud of you.”

So, now the question becomes, is the Yahweh/Gwendolyn entanglement strong enough to over come Lucifer’s plans and save Heaven and Earth?  It’s more complicated than you think.

If you like this story and want to know more, please subscribe to this blog and I’ll send you periodic (about once every other week) updates and musings on GOD GAMES as I work to self-publish this SciFi Retelling of the Greatest Story Ever Told.

And if you want to see more fantastic SciFi works, please check out some of my fellow authors’ amazing SciFi writings about Epic Antiheros of 2021.  Click on this link or the image below to get into some interesting summertime reading.  But don’t dilly dally too long as this promotion ends July 27.