Authors put a lot of symbolism in their stories. These symbols can take many forms like a place, theme, and action. These symbols can even take the form of an odd juxtaposition of facts, background or situation to current events. For GOD GAMES, I took names from established folklore, myths and religion to create the characters, their moods and drive their crazy action.

Now, using the names Yahweh and Lucifer was easy. Everyone understands the traditions and beliefs behind those monikers. And while some thought that my use of Lucifer’s last name “Deville” was a bit over the top, I decided to have some fun while keeping the obvious link.

What about the other characters in this SciFi Bible version of the greatest story ever told?

Well, there’s Professor Raphael Liwet, an oversized jokester who loves high-tech toys and his serious minded and old-fashioned mentor, Professor Hayyel Manakel the interplanetary animal taxonomist who “can’t stand those damned contraptions.” There’s also Professor Maion Harahel the gloomy Dean Superior of the Great Scientific University of Heaven who constantly scolds a klutzy Yahweh.  Then, we have Zuphlas the forest caretaker in the Garden of Eden who sleeps with Eve and is subsequently killed by Adam.

What’s the genesis (sorry) for those names and what do they mean?

Well, you observant ones and those in the know have probably realized that the names I used for the folks in Heaven are angels associated with Christianity, Judaism and Islam. 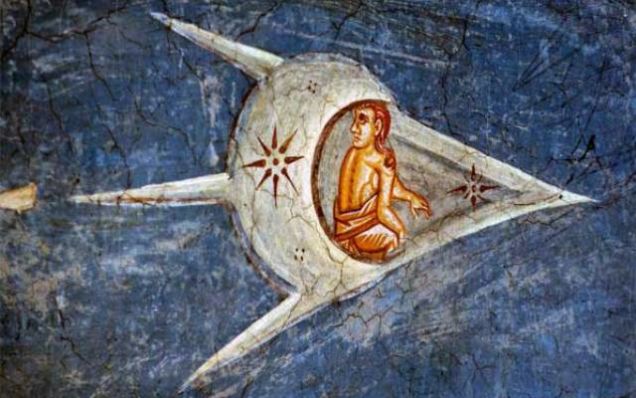 And the meanings are all salient in GOD GAMES where science mixes with religion—just like this medieval picture of an angel in what looks like a spaceship!

For instance, in GOD GAMES, Abram, the villager who meets Yahweh in the Garden of Eden, wonders about Yahweh’s name. “Such a strange and simple label that tells nothing about him or where he’s from.” This is a beautiful description of the difficulty behind the Tetragrammaton, a four-letter Hebrew word יהוה that communicates the proper form for Yahweh, a forbidden name that could only be uttered by high priests.

And what about Professor Yahweh Tabbris’ last name? Well in Hebrew, Tabbris means Angel of Self Determination, the angel that presides over free will.

Then there’s Yahweh’s boss (yes, in this SciFi remake of the Bible, Yahweh reports to a higher authority) Dean Superior Maion Harahel, the grim nosed head dean of the Great Scientific University of Heaven. Maion is the angel of self-discipline and Harahel is a Hebrew name meaning angel of knowledge. So, Maion Harahel is an appropriate name for someone high up in academia.

And what about Judge Jehoel, the chief elder presiding over the Grand Council of Heaven? Well, the name Jehoel is from apocryphal literature that means the angel who holds the Leviathan in check. As the head of Heaven’s law court (think Chief Justice of the US Supreme Court) Jehoel is the one charged with ensuring the Six Rules of Life are adhered to in Heaven.

Then there’s the taxonomist, Dr. Hayyel Manakel, who names the animals on the fifth day of the parallel universe’s creation. Hayyel’s name means Angel of Wild Animals in Hebrew.

Now, on top of all these names taken from folklore, myths and religion, I cooked up the name Korbibtor, the god of Lucifer and his fanatic followers. But put down your iPhones and Androids because a Google search will do you no good! There’s no official or unofficial source for this name that I created. But I can tell you it has three main parts that are known the world over and can’t seem to get along. Can you name those parts?

Not everyone will catch every reference but it was fun doing the research of these angels found in the great religions to see how they would play out in GOD GAMES. You can, of course, Google the term “Angel Names” to access a wealth of information behind the other characters in GOD GAMES.  Nevertheless, be prepared for a lot of inconsistencies but that’s OK for science fiction.