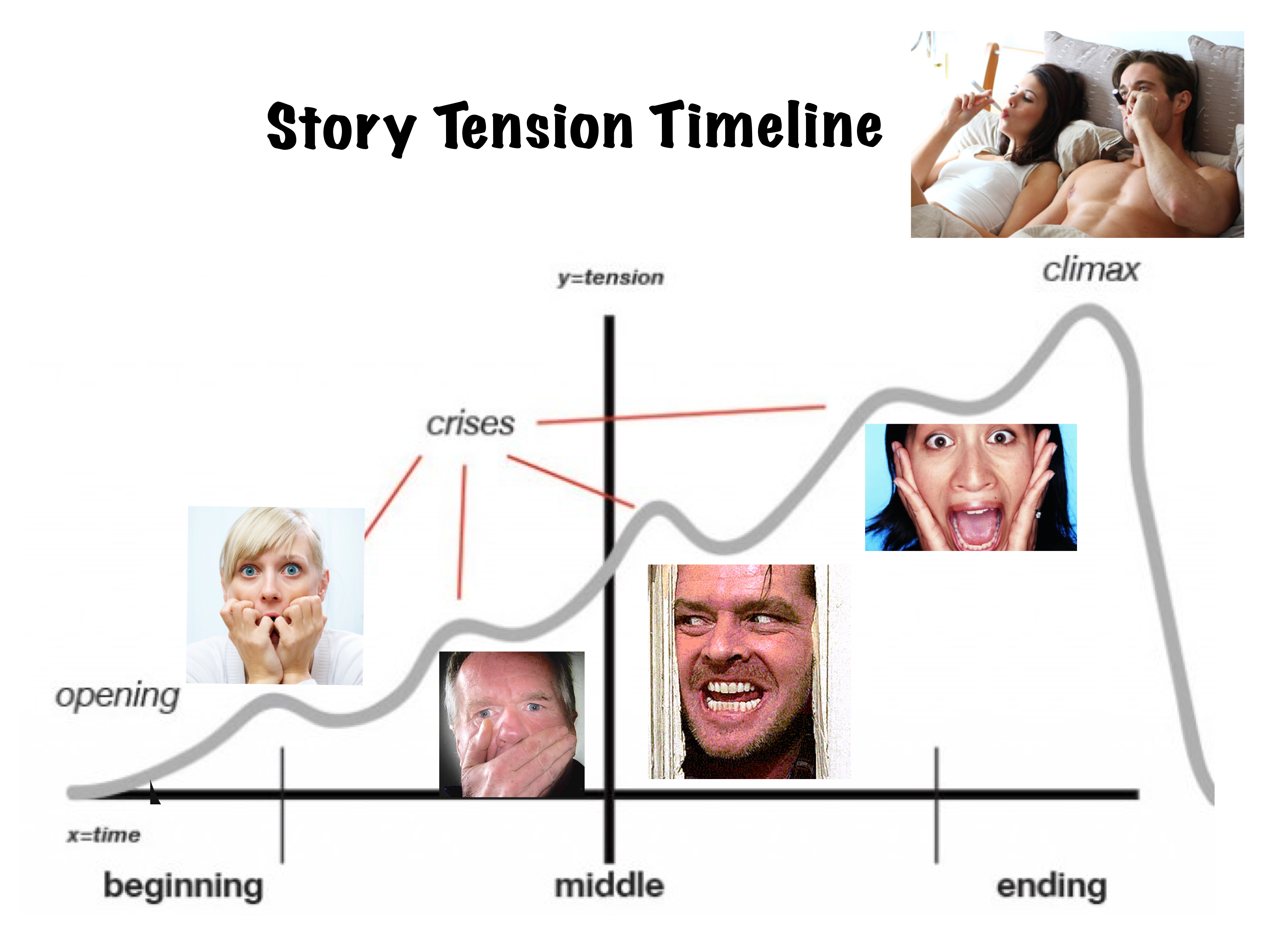 If you draw a line graph showing the relative tension and excitement of a story, the line’s highest point should be at the climax of the story.  Yes, yes, that’s the place, the magic spot where you want to bring your readers.  And if applied correctly, with the right words and tone, with the correct use of rhythm, power and depth, readers will experience an ecstasy, a sort of rapacious delight that will make them come back for more and more and more.

In MILK RUN, this is where our young Captain Toby’s star shines as he leads his crew to defeat the Telrachnid gunship and rescue his fiancée, Smriti.  This action occurs in the last quarter of the novel and is the sixth of MILK RUN’s seven story skeleton bones.

After Captain Toby convinces Chief Stockton to jerry-rig ‘the crowbar‘ to the USS Princeton’s matter-antimatter power system, the Telrachnid gunship reappears for another hit and run ambush.

The Telrachnid gunship swoops in and sprays a red hale of cannon fire that penetrates the Princeton’s armor plated hull.  Crew members douse electrical fires that breakout on the bridge as Toby watches the gunship speed off.   But this time he orders the navigator to maneuver the ship around and give chase. As the Princeton closes in on the Telrachnid gunship, Captain Toby orders the missile control officer to launch the Quantum Entangled Radio Controlled space torpedoes and for Chief Stockton to activate ‘the crowbar.’  But sparks fly out from the engineering console as ‘the crowbar’ shorts out the engine control systems and threatens to destroy the ship just as the chief feared.

The chief dives under the engineering console to put out the flames and reconnect ‘the crowbar’ as an orange halo begins to form around the Telrachnid gunship.  Watching the external viewing screen, Toby fears the gunship will escape back to its parallel dimension hiding place. So he orders the navigator to increase speed. Suddenly, the USS Princeton jolts back and a blood red glow wipes away the stars from the viewing screen.  Then the Princeton jolts forward as the red glow dissipates and new stars pop into view.  And silhouetted against this new field of stars is the fleeing Telrachnid gunship. The new ‘crowbar’ connections put in place by Chief Stockton hold steady.  “D-jump complete,” yells the chief as he wipes sweat from his brow

Now another space battle erupts as the USS Princeton ambushes the surprised Telrachnid gunship.  But on the bridge of the USS Princeton, Toby’s fiancée, Smriti, slips back under the Telrachnid’s telepathic control and attempts to distract Toby once again.  This time Toby refuses to give in and orders another salvo of Mass Rail Cannon fire onto the spider infested gunship.

Like all climaxes there are some loose ends that must be faced. Those will be explored in the last story bone- the Wrap-up to be covered in a future blog entry.

Meanwhile, click here to see the action for the other story bones of MILK RUN.