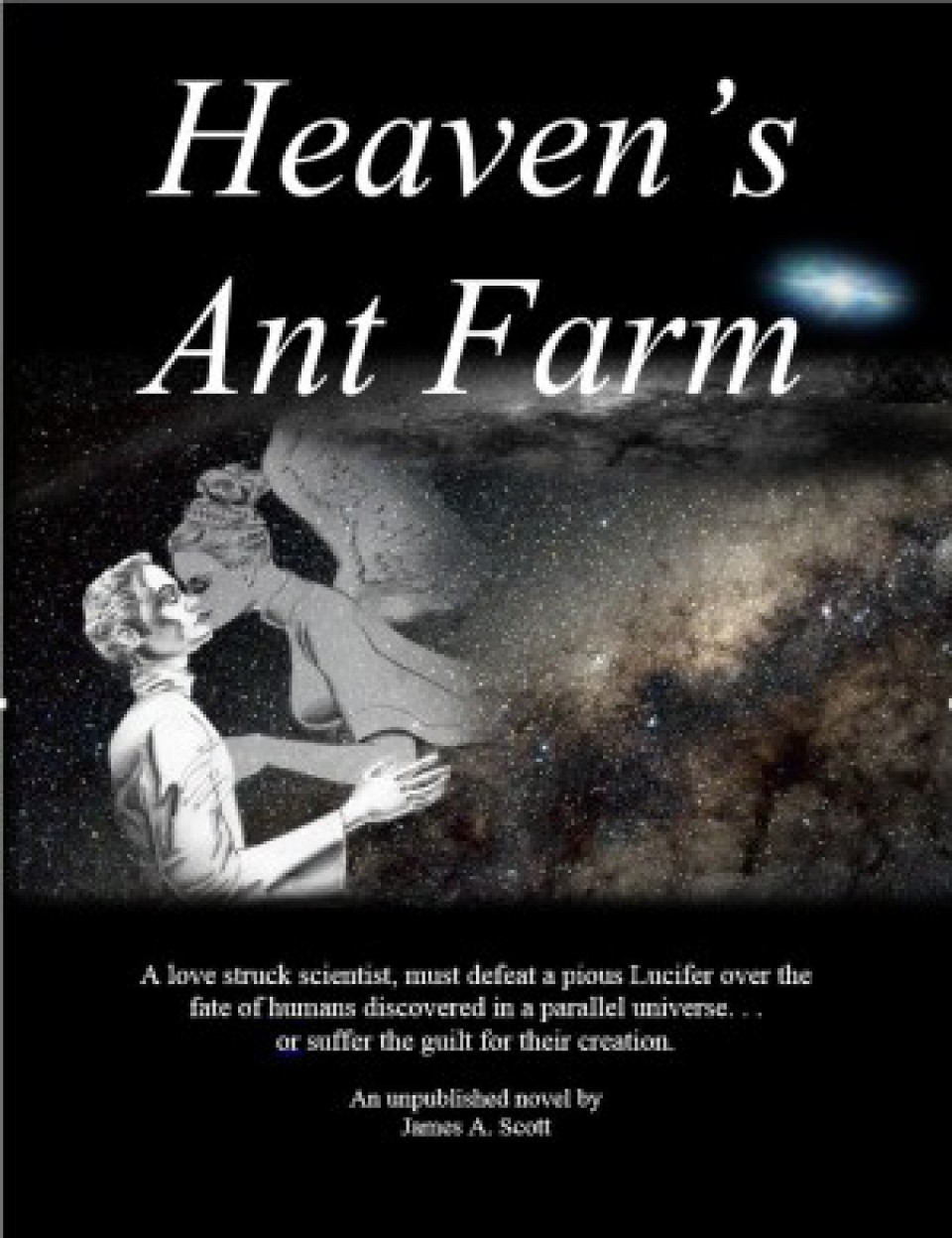 The setting is in Heaven- 3,127.3 years after the Holy Nuclear War.

Warm waves of tall grass brush against a peach orchard and a green pasture that surround a large polygon-shaped home. Blue light streams out from the second-floor bathroom window and fades into the early morning sun.

Inside the bathroom, a sleepy Professor Yahweh Tabbris stands in front of a tall black glass panel. It lights up to show an exact 3D image of him along with a medical alert: blood pressure, 157/80.

The forty-two-year-old quietly sighs as he pops in two pills. “Again?”

Yahweh’s holographic mirror image zooms in as he slides one hand across the pepper-gray bristles of his grimaced face—sounds like sandpaper.

“I’ll do that later,” he grumbles as he looks around for his white lab jacket. He can’t find a clean one, so he pulls out a wrinkled lab jacket from the laundry hamper. The grubby, ankle-length robe drapes over his angular body like an oversized rag. He lifts his arms to sniff under his armpits. “S’okay,” he says in a low voice as he wobbles toward the hallway.

He hears the sound of kiddy laughter and fast footsteps approaching as he turns the corner into the hallway.

Just as Yahweh walks in, a kiddy freight train led by a large robotic dog made of foam rubber covered with orange shaggy hair chased by two howling children roars past him. Their wake almost knocks him down. He steadies himself and groans as he makes his way along the hallway and down the stairs. He pauses before going farther. Best to look both ways before stepping into the playroom.

The dog and kiddy train blow by Yahweh’s wife, forty-one-year-old Gwendolyn Tabbris, as she sits unperturbed on a cushioned chair. The gaze of her soft brown eyes puts a smile on Yahweh’s grumpy face.

Gwendolyn’s medium-length brown hair brushes against the shoulders of her plumpish-yet-well-proportioned body as she rises to greet Yahweh. She wraps him in a tight hug. Her hypnotic gaze and warm embrace relieve the pressure in Yahweh’s body.

Their two kids, nine-year-old Mary and ten-year-old Alexander, return to the family room.

Knee pain from his encounter with the kiddy train streaks up Yahweh’s leg as he turns to them. “Don’t you kids say good morning anymore? And shouldn’t you be getting ready for school?”

“Good morning, Daddy!” bursts Mary as Alexander leans his skinny frame against Yahweh. Their greeting warms the pain right out of Yahweh’s knee, as if the collision never happened. He gazes down on the seemingly inseparable kids—Mary’s chestnut eyes just like her mom’s and Alexander’s stringy, fidgety frame draped in what looks like oversized clothing. Despite their antics, he can never stay angry at them.

Yahweh’s attention returns to Gwendolyn. Something is not quite right with her. She waves off his concerns, but he persists.

As Alexander and Mary watch, Yahweh guides Gwendolyn back to her chair and then waves a small medical device in front of her. It downloads information gathered by the medical scanners imbedded in her clothes. The diagnosis scrolls across the device’s screen. It confirms Yahweh’s suspicion: she has a serious bacterial infection.

Yahweh turns to see holographic images of the bacteria projected onto the playroom’s wall. “You must have picked up this microbe while gardening,” he says. “It’s one that was altered by the nuclear war. Particularly dangerous.” He then leans in close and whispers so the kids can’t hear, “This could be serious if not treated quickly. I’ll call the medical center.”

She gives a lethargic wave. “I’m all right. Just a long day in the garden, that’s all.”

Yahweh ignores her protest and motions to the holographic video wall. “I think we need a doctor here.”

The holographic germs on the video wall disappear. Then a 3D image of a rotating red cross appears as a soothing woman’s voice announces, “A doctor is on the way. Please stand by.”

“Yahweh, there’s no need,” Gwendolyn protests quietly. “I’ll be fine. You had a busy day yesterday. You should rest.”

Memories of Gwendolyn’s mother, who died three years ago from an untreated infection, still haunt Yahweh. She was too slow to seek help. “I’ll rest when those bugs are taken care of,” he insists as Gwendolyn’s smile soothes his turbulent reflections.

Then a bright blue light reflects off those chestnut-brown eyes of hers. The flash from the Quantum Entanglement Substance Transportation (QUEST) satellite network announces the arrival of a visitor from the Great Scientific University Medical Nanobot Institute. A man with long gray hair and wearing a white frock makes a house call from over two thousand miles away.

Yahweh looks on with disappointment as the relic leans heavily on a wood cane.

The old-timer returns the scrutiny and grunts, “You the patient?”

“My wife,” Yahweh tells the old man as he escorts him to Gwendolyn.

The old man totters his way to Gwendolyn and greets her with a smile, revealing large, pearly white teeth. As he unpacks a small black bag, he asks with a soft, grandfatherly voice, “What’s wrong, my dear?”

“Nothing,” Gwendolyn answers. “Just a slight fever, that’s all.”

“Ah, well, let’s see about that,” the doctor responds. He waves his medical scanner at her and then sets it down and slowly moves his wrinkled hand to check the skin on her hands, arms, and forehead.

Yahweh eyes the crinkled and slightly overweight man who, though standing, is no taller than the seated Gwendolyn. He must be a hundred! “Pardon me, but are you the right person? We reported a medical condition, not a skin problem.”

“Don’t trust these damn scanners,” the centenarian growls as he holds the back of his hand against Gwendolyn’s forehead. “I like to check myself.” He touches the medical scanner again with his trembling finger to review the report. His bowed body rocks back and forth slightly while he reads ever so slowly.

Yahweh, growing impatient, clears his throat. “Uh, should we call for a medical consult?”

The old man’s eyes dart about as he continues to read the scanner.

“Maybe you should get a second opinion here!”

That’s when gramp’s eyes, bright with life, peer out from beneath his thick gray lashes to examine Yahweh. “Young man, I’ve been doctoring around this world long before you were shot out of nut city. And I’ve got more medical degrees than an old dog has fleas. I’ve seen this bug many times. From the war, you know. There are five thousand variations, so I have to double-check. But no big problem here.” After he confirms his diagnosis, the old doctor prepares an ointment filled with medibots. “This has the right sort of bots to destroy the germs.”

Familiar with the procedure, Yahweh tells Gwendolyn, “These medibots will destroy the bacteria causing your illness.” Yahweh then peppers the centenarian with questions. “Are these N2 type medibots or the older Y type bots? What about secondary infections? Gwendolyn is a gardener, you know. We need to ensure that she can fight off reinfection.”

The old doctor growls back answers as he works.

Yahweh fires off another volley. “I heard the medical center is experimenting with N3 medibots designed to stay in the body. How is that coming along? Any idea when that will be available?”

The centenarian lifts his heavy gray brow toward Yahweh again.

Just as he begins to ask more questions, Yahweh feels a mental tug that draws his attention toward Gwendolyn’s soft brown eyes. She doesn’t speak a word, but in his head her voice is loud and clear. “Now make me proud. Hush!”

Yahweh turns to the doctor, who looks ticked, and backs off. Probably best to let Gramps do his work and avoid another wisecrack. But he quietly analyzes every step the doctor takes to apply the medibots to Gwendolyn’s arm. “They will be absorbed directly through the skin,” Yahweh tells her.

The doctor grunts in agreement as he uses a medical scanner to monitor the medibots’ progress.

Still a respectful distance away, Yahweh uses his own device to track the medibots.

The medibots report their status as they quickly attack and neutralize the bacterial invaders. Within fifteen minutes, they even detect and destroy a microscopic tumor on Gwendolyn’s left kidney. After they’ve done their job, the bots migrate from her body onto moistened gauze that the doctor wrapped around her thumb.

Yahweh grins widely as the doctor collects, counts, and deactivates the medibots. “They’ve done their job!”

“I concur with your medical opinion, young man,” the centenarian tells Yahweh as he packs up his little black bag.