Wrap Up!  That’s the last bone of our story—MILK RUN.   Coming right after the climax, this is typically where loose ends are tied up to close the story, where we learn the fate of the principal characters: Captain Xxxxx Topy, Chief of the Boat George Stockton, Dr. Smriti Xxxxx, Dr. Susan Connor.  (Yes, I still need to figure out complete names for some of these characters.) There’s not much more to say about Commander John Emerson since he died.  But we will see his continued influence on Toby.

The last of MILK RUN’s seven story skeleton bones, the wrap up is normally kept short so as not to detract from the climax.  But instead of the “and they lived happily ever after” approach, I opted for a cliff hanger.  Sort of like what Peter Weir and John Collee did when they wrote the movie MASTER AND COMMANDER (2003) that ends with Captain Aubrey (played by Russell Crowe) chasing the French war ship he captured fearing that the crew he put in charge to bring the vessel back to England (for prize money) is in danger.  That very, very last wrap up scene lasts about 20 seconds and left me hanging with a desire to see the movie’s sequel, which I suspect will never happen (sigh). 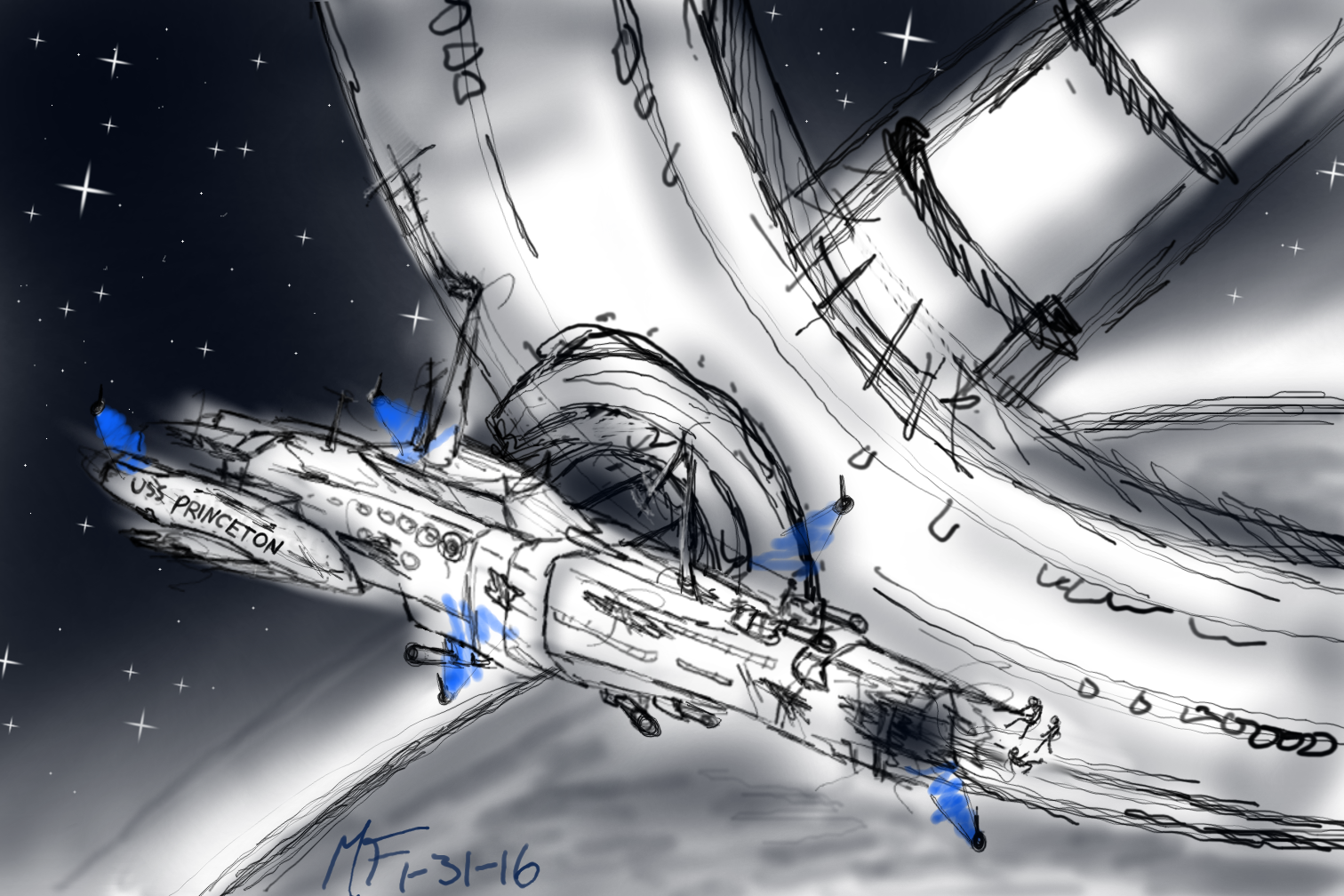 The USS Princeton has delivered the now field tested ‘crowbar‘ (see story climax) to Star Base 24 after destroying the Telrachnid gunship. Captain Toby and Chief Stockton oversee the repair of their badly damaged warship now in space dock.

There’s still a rift between Toby and Smriti, his fiancée who once again leaves him under the guise of helping SpaceComm better understand the Telrachnids. Toby responds to his now ex-fiancée’s action by retreating into the refuge and distractions associated with being captain of the USS Princeton and received honors for leading the first SpaceComm ship to defeat a Telrachnid warship in a parallel dimension.  So, Dr. Susan Connor, hoping  to make Captain Toby forget about Smriti, decides to signup for another six month tour of duty on the USS Princeton and personally oversee the stem cell activated regeneration of Toby’s left arm.

Finally, Toby learns from Stockton that SpaceComm has spotted suspicious movements of Telrachnid ships that seem contrary to the information Smriti has provided.  Also, Stockton tells him that inaddition to continuing as his ship’s medical officer, Susan was also appointed to SpaceComm’s Telrachnid Strategy Advisory Board. It now seems that Susan has caused SpaceComm to doubt Smriti’s intentions.

The story ends with this question to Toby.  Is Smriti telling the truth or is she just a drug addicted pawn still under the Telrachnid’s telepathic spell, willing to sell out Earth for her next fix?

Click here to see all of the story bones for MILK RUN.

I’m now going to write up the story beat points that outline the detailed actions in the story.   More to come.