So, a few weeks ago I asked for your comments and suggestions to help decide on the official book cover for “Heaven’s Ant Farm.” Well, I got more than I bargained. I ended up ditching the original prototype cover AND I ended up changing the name of the book. I didn’t see that last one coming! 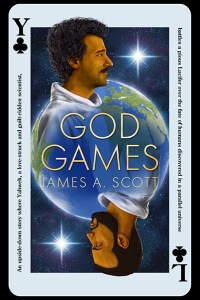 Here’s the finished version of the winning new book cover developed by my UK illustrator, Jon Stubbington. As an aside, you need to check out his portfolio. He is easy to work with and comes up with some kooky ideas that challenges your status quo.

But, like I said in an earlier post my original book title, “Heaven’s Ant Farm,” doesn’t fit the picture. What’s more, the new book cover better reflects the actions that are shown in the book. So, the new title of “Heaven’s Ant Farm” is “God Games.”

Now, I caught some constructive flack from folks on the name change, especially on the use of the word “games.” I expect more dire musings from my priest friends in the Church around the question: Is God really playing games with us?

And that got me to realize that, yes my thinking about this book has turned a bit darker and more controversial. What’s more, a good friend of mine, voiced concern that my story might be seen as linking Yahweh’s actions to this line from Shakespeare’s “King Lear,” As flies to wanton boys are we to the gods; They kill us for their sport? That raises an even more disturbing picture. Maybe, just maybe, instead of divine justice, there is only the sport of vicious, inscrutable gods. If so, we are screwed!

Now, that’s a powerful consideration that stopped me cold (thank you Mark)!

But in the end, that’s what I want to do, get the reader’s attention. I may have to move out of town, but I want you all to wonder a bit (and read about) what the heck is going on in this SciFi story. Yes, Yahweh is trying to do good and counter Lucifer’s efforts. But looked at from an externally ignorant point of view, it might seem like these two guys are simply using the sun and a magnifying glass to play games with (us) ants on the farm. There’s even a line in the book where Yahweh challenges Lucifer to “test” humanity on Earth. Lucifer subsequently accepts the challenge and that’s when the games begin!

And yea, the unknown has been known to kill for sport, hence the fear factor. That perspective is explored in the “Rumble in the Jungle” chapter where the residents of Eden become collateral damage during a firefight between Yahweh’s Cherubim army and Lucifer’s armed mob followers.

Could I have selected a better title, probably but the tag “The Gods Must Be Crazy!” has already been taken!

As always your comments are welcomed and please subscribe here to receive more musings on “God Games.”