So, I’m planning an author’s group promotion event for June. The goal is to hook up with established and start-up authors such as myself and share our resources to attract Sci-Fi readers who might be interested in either purchasing our books or following the progress of our work on a new book and want to be one of the first to receive the finished masterpiece.

As I mentioned in an earlier post, I’ve developed a “Reader Magnet,” which is a free gift give away to attract book fans. In my case, the reader magnet is the first full chapter of GOD GAMES.  I will give away this reader magnet for free to readers who subscribe to my blog and become part of my mailing list. I’m working on another free gift give away that should interest readers.  It’s a set of playing cards that showcases the main characters of GOD GAMES. The first playing card is already done and serves as the book’s front cover.  Adam and Eve are next. More on that in a future post!

But, back to the promotion. I wanted to do something different than what others are doing. I needed a different approach, a theme really, something that would resonate with fellow authors who are also climbing up the self-publishing hill.  But I also want to celebrate authors who managed to breakout with a successful promotion campaign, or sold lots of books or have an extensive email list of subscribers who follow them.  The goal is to leverage our respective inventory of blog followers, subscribers and email lists to promote giveaways for a select number of our respective books!

This is a match up of big and small.  It’s the “Davids,” those newbie authors just starting out and the “Goliaths,” those established authors with decent followings and book sales!  So, that’s the theme for my promotion, David and Goliath.  But like my book, GOD GAMES there’s a serious twist from the known story. 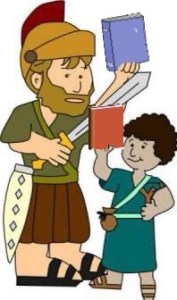 Instead of fighting, Goliath helps David to be a successful author.  What’s really cool is that this is a great opportunity for those Goliaths with large mature email subscriber lists to think back to that time when their huge email subscriber list was just a tiny twig of close friends and unwilling relatives. But now, that they have grown that twig of an email list into a nice sized tree of contacts, it’s time to consider giving back and grow the pie of Sci-Fi readers for all authors by helping those starting out to be big and strong. In other words to help the Davids become Goliaths!

Knowing they were once a struggling author, I’m betting that the Goliaths will want to give back to the system that has made them successful—by paying it forward to help new authors succeed!  So, this new promotion is one of those giveaways where Goliath and David team up for a common cause: promote Sci-Fi books by new authors.  I’m making this happen by matching the Goliaths with good sized email lists to help us small fry (Davids) just starting out.

Everyone benefits from this mutual relationship. The Goliaths benefit because they can add value that will be appreciated by their existing email list subscribers and followers.  That value is an exciting list of more Sci-Fi stories from new authors.  The Davids benefit from exposure to proven email subscribers who love reading Sci-Fi adventures and drama.  It’s an wonderful opportunity to grow their list of followers.  And that is how you grow the pie!

To keep things manageable and not overwhelm potential subscribers and followers, I’ve decided to limit the number of Davids and Goliaths to just four each (max two books per author). That’s eight authors with sixteen books ready for fun summer time reading.

This idea seems to be taking hold because it only took two days to find a good number of Davids and Goliaths interested in participating. Feedback comments received so far include: “I love it […] looking to someday give back as a Goliath!,” “Great Idea!” and “I like the idea of Goliaths and Davids […] and limiting the number of authors/books. Thanks!”  So, I think I’m on to something and will make the final participating author selection in a few days.

So, stay tuned and subscribe to this blog to get an update on this Pay-It-Forward promotion campaign and find out more about our books!

Interested in joining our merry little band of Davids and Goliaths for future Pay-It-Forward promos?  Feel free to leave a comment on this blog page.  Thanks!

2 thoughts on “Pay It Forward! The Road To Successful Self-Publishing Is Paved By David & Goliath Working Together!”