Here’s a scene from my SciFi book GOD GAMES.  This is from a chapter titled “Abram.”

Having chased Lucifer to Earth, Yahweh finds himself in a paradise like forest (later to be called Eden located in eastern Africa). But before Yahweh runs into Adam and Eve, a tall dark skinned village leader saves him from being skewered by a giant wild boar. Unable to fully decipher the elder’s verbal words and tongue clicks, Yahweh decides to call him, Abram.  (That’s so typical 🙄!)

Now, Yahweh comes from a tech utopian society that is light years more advanced than the residents of the Garden of Eden. But there’s no clear evidence of this from this villager elder’s point-of-view as Yahweh tries to both introduce himself and anoint the elder with a new name (Abram) in the short passage below. 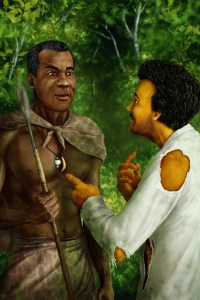 The elder once again watches as the strange gold-colored man with the white, furless animal skins points to himself and says, “Yahhh-wayyy.” Then the stranger points to the elder and says, “Abe-rum.”

Bewildered, the elder scratches his head. Yahweh—such a strange and simple name that tells nothing about him or where he’s from.

Again, the strange man who calls himself Yahweh points to the elder, clicks, and then repeats, “Abe-rum.”

The elder studies Yahweh’s torn animal skins, which are the color of a dull white cloud. Somehow, this Yahweh has wrapped that flimsy ensemble around his entire body, including both legs. How can that protect him from thorn bushes or the biting green-headed flies? It also looks hard to remove. Suppose he has to relieve himself?

The wet spot between the stranger’s legs seems to provide an answer. Does he just do it in there then walk around the rest of the day like that? Uncivilized!

Perhaps the skinny man with the simple name wants to give him a trite title, as well. But that’s bad form. The elders’ family heritage of brave and wise men demands the use of his traditional, full inherited name, pronounced in the correct order and cadence.

Again, the stranger points as he speaks. “Me Yahweh. You Abram.”

The elder points to the stranger and says, “Yahweh.” Then he points to himself and with correct dictation and properly placed clicks and clucks announces his full inherited name: “Honored Diamond Rock Keeper; Slayer of the Mighty Horn-Tooth Tiger; Defender and Son of Our Great Savior; Teacher, Father, and Youngest Elder of the Great Village by the Falling White River.”

The gold-colored man’s hair swings back and forth in frustration as he shakes his head and pronounces that short, silly name again. “Abe-rum.”

The elder sighs loudly.  Can this stranger even handle complex ideas? Perhaps he’s not the brightest point of light in the night sky. After all, he just stood there while a pig tried to impale him to a tree.

Again, but now with a deep frown across his eyes, the gold-colored man clucks, “Me Yahweh, then clicks You Abe-rum.”

The elder drops his head and kicks at the dirt with his foot. Yahweh’s improper pointing, clicking, clucking, and attempted christening is getting nowhere.  Perhaps it’s best to accept the proposed simple name. So, the elder offers a graceful smile and then points to the golden man and says, “Yahweh.” Then, he points to himself and says, “Abram.”

Want still more?  Jeez, you are greedy! OK, if you like Harry Potter’s Quidditch game then check out Nico Pengin’s short SciFi story: Batey Ascending where human life has a second chance to live after Earth’s destruction. 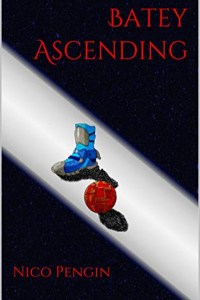